Apple scab can occur on any apple tissue, but is most commonly seen on leaves and fruit. Small, raised, fuzzy, olive-colored spots will first appear on fruit cluster leaves near bloom, or on early vegetative leaves and immature fruit after petal fall. On leaves, infections may be visible on the top or undersurface. These primary lesions expand if untreated, turning yellow and eventually black. With heavy infections, the entire leaf turns yellow and drops. Leaves that are completely covered with scab are said to have “sheet scab”. Secondary lesions, formed by spores produced in the first or primary lesions, are similar to the primary lesions. They develop on vegetative leaves or fruit through the growing season. Scab infections on fruit first appear as gray to black spots that develop cracks as fruit grows. Tissue becomes brown and corky around and in infections. Multiple infections deform the fruit. In storage, fruit infected at the end of the growing season may develop small, dark spots called “pinpoint scab”.

A key to scab management is preventing primary infections early in the growing season. If primary scab is controlled, then there is no need to continue scab fungicide applications during the rest of the growing season. Primary control greatly reduces the chance that resistance to fungicides will develop, and reduces the chance of scab in the next season.

V. inaequalis overwinters in apple leaves infected the previous season that fell to the ground. Scab spores may also overwinter in bark cracks and in buds, and cause infection in the spring, but this is rare in New England.

Warming temperatures in the spring around bud-break stimulate the fungus to make mature ascospores in old, overwintered leaves. The first mature spores are generally available at the same time trees are first producing green tissue, green tip, though the relative amount of mature spores varies. The first type of scab spores, ascospores, can cause primary infections from green tip until all ascospores for the year have matured and been released, usually one to two weeks after petal fall, though again this timing varies depending on periods of dry weather. In orchards where there were very few or no scab infections the previous year, and where sanitation is done, the risk of infection at green tip is relatively low. The most intense spore release and highest scab risk usually occurs when trees are at pink through to petal fall.

Daytime rains release mature ascospores into the air when they are mature. Those spores may land on emerging apple leaves or new fruit causing primary infections. For infection, apple tissue must be wet for a minimum number of hours, depending on temperature, so it is important to measure the length of wetting periods. Near freezing, the fungus needs two days of leaf wetness to infect, while at 61ºF to 75ºF it takes only 9 hours. After infection, it takes from 9 to 17 days from the time of infection for visible symptoms to show, again depending on temperature. See IApple Scab  Infection Periods.

Primary infections produce conidia, spores that cause secondary infections. Several additional secondary infection cycles can occur during a growing season, depending on rain, though apple tissue becomes more resistant to scab as summer progresses. In the fall, leaves drop and a new generation of ascospores develops the next spring.

Most commercial apple cultivars are susceptible to apple scab, and commercial management requires fungicide applications at approximately weekly intervals from bud break to two weeks post-bloom. However, spraying according to the calendar rather the the risk of apple scab will use more fungicide sprays than are usually necessary, so chemicals should be applied according to risk forecasts, most easily obtained using decision support systems, such as Ag-Radar or NEWA.

Detailed options for fungicide selection are given in the Apple Spray Table. The following is a general overview of chemical management of scab.

Early season - silver tip through tight-cluster. A dormant to green tip application of a copper fungicide primarily targeting fire blight is recommended, and is a spray that will also give 5 to 7 days of protection against scab. A combination of captan (3 lb. of Captan 50W or equivalent) plus an EBDC fungicide (3 lb of Dithane M45 or equivalent), a so-called “captozeb” mix, is effective in most orchards at this time. In blocks where scab pressure is high or during extended wet weather, applications should include Syllit, Vangard or Scala. Do not apply more than two applications of these materials in a season.

Tight cluster through pink. If scab pressure is low, the captan/EBDC mix is sufficient. Keep in mind, this is the time when primary scab risk is highest so do not take risks. For moderate to high risk situations, combine a multi-site fungicide, captan or EBDC, with a site-specific fungicide:

Petal fall through first cover. Again, where and when scab pressure is low a captan/EBDC mix is sufficient. In higher risk situations, combine a multi-site fungicide, captan or EBDC, with a site-specific fungicide:

There are serious problems with resistance to scab fungicides. See Resistance management: apple fungicides for details.

Mixing captan with oil, other pesticides that contain petroleum-based carriers, or with spreader/sticker/penetrant chemicals may cause damage to fruit and foliage. For tank-mixes that contain several pesticides, thinners or nutrients, avoid using captan. Minimize or avoid use of captan from petal fall through first cover to decrease the risk of fruit damage.

Sanitation targets overwintered inoculum, reducing it and subsequent risk of infection and the magnitude of epidemics that may occur. Leaves on the orchard floor are swept and ground up using mowers or flail choppers in the spring before bud break. In addition, as an alternative, 5% urea may be sprayed on trees just before leaf drop in the fall, or to the orchard floor after leaves drop in fall or spring. Both chopping and a urea spray may be used for more effective control.

Apple varieties vary in their susceptibility to apple scab, and some cultivars are resistant to scab. Cultivars such as McIntosh, Cortland, and Empire are susceptible, while Golden Delicious and related cultivars are less susceptible. Honeycrisp is somewhat resistant to apple scab. Several cultivars have single-gene resistance, for example, Liberty, Modi, Topaz, Pristine, and Ariane, though some scab strains that can infect these varieties have developed in specific areas. Using a few fungicide applications to manage other apple diseases reduces the risk that this resistance will be develop.

There are an increasing number of biopesticide products that have been labelled for controlling apple scab. However, while they may work reasonably well under low inoculum conditions, they are limited in their ability to manage apple scab under high disease pressure. 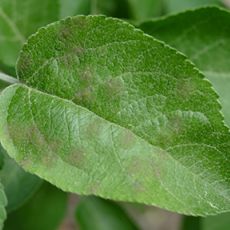 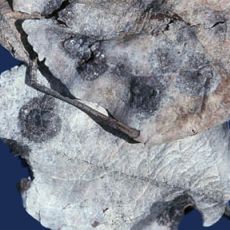 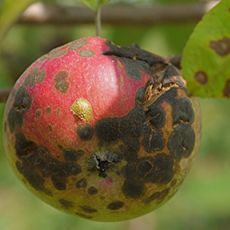 ‹ Diseases up Apple scab infection periods ›
Back to top