Typically apples first show bitter rot symptoms in July and August, and fruit susceptibility increases as it matures. Humidity, and the presence of sources of inoculumare also factors that determine when the disease first appears. Bitter rot spots usually appear on the side of the apple directly exposed to the sun. Early fruit lesions are brown, slightly sunken spots. If the apple is cut open, the rotted area beneath the lesion is V-shaped in cross-section. Bitter rot lesions expand most rapidly at a temperature of 86oF. As lesions expand they remain light to dark brown and flattened, developing concentric, target-like rings of spores, colored pink, slight orange to light tan. Severely infected fruit become shriveled and persist on the tree as mummies, a source of inoculum.

The disease cycle of the bitter rot fungi related to apple fruit infection is only partially understood. Bitter rot fungi overwinter in dead wood or mummified fruit in apple trees, and may live on other plants, including trees surrounding orchards or broad-leaf weeds in orchards. The fungi produce spores in spring and summer, which are released by rain and dispersed throughout trees. The optimum temperature for spore germination is 79 to 80 F, when it takes only 5 hours to infect. Infections commonly start during prolonged warm, wet weather. As soon as infected fruit produce spores, these can cause new infections. Another source of inoculum is shoots killed by fire blight which become colonized by bitter rot fungi in the same year.

Fungicide applications targeting bitter rot should start at fruit set if weather and previous disease history favor infection at that time. For the rest of the summer in orchards with a history of the disease, fungicides to manage bitter rot should be applied when prolonged warm, wet weather is predicted, particularly as fruit matures.  Among the most effective fungicides against bitter rot are the EBDCs. Unfortunately they have a 77 day pre-harvest limit. Captan and Ziram are also effective, as are Pristine and Merivon, group 7 + 11 pre-mixed fungicides. For resistance management and improved efficacy, Pristine or Merivon should be tank-mixed with captan at one half the full rate. No more than 4 applications of Pristine or Merivon should be made per year. Note: Topsin M has no effect on bitter rot.

The most important cultural control is to remove sources of inoculum: dead wood, branches and shoots with cankers and fruit mummies. Following fire blight outbreaks, dead shoots should be removed as soon as practical as these can become infected with bitter rot and become inoculum sources. While yet unproven, a few other cultural methods may help control bitter rot. It may also be useful to avoid or minimize stress, particularly drought and heat stress. Some tree species close to orchards may support Colletotrichum spp., making it worthwhile to establish open buffer spaces between trees and orchard borders. Removing leaves, dead twigs and fruit mummies on the ground may reduce inoculum. Finally, removing broad-leaf weeds in the orchard may remove another source of inoculum. 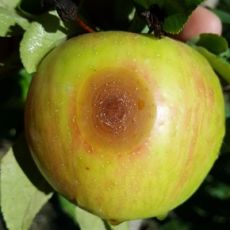 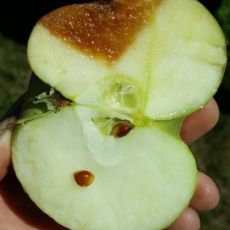