Cedar-apple rust is a fungal disease that requires both a Rosaceaous host (such as apple) and a cedar host (such as Eastern red cedar). On apples, bright orange-yellow lesions are first visible after bloom. These lesions develop from spores released from galls on cedars earlier in the spring. Some species of cedar-apple rusts also produce lesions on fruit.

During prolonged wet periods in the spring, typically from late April to late May in southern New England, galls on cedar/junipers secrete orange-brown gelatinous tendrils (known as telial “horns”) which produce spores. Spores blow from galls and those that land on apple leaves can cause infections if leaves remains wet for 4–6 hours.

Lesions on apple leaves become visible soon after bloom, but continue to enlarge and become more striking in July and August. In late summer, spores are produced on the underside of apple leaves and spread the disease back to cedars.

Fungicides are needed to protect leaves and fruit of susceptible varieties during periods of extended wet weather from pink through 2nd cover. At this time there are no effective organic fungicides that adequately manage cedar-apple rust. 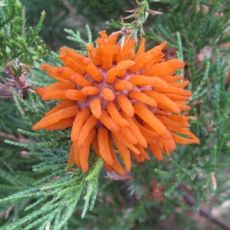 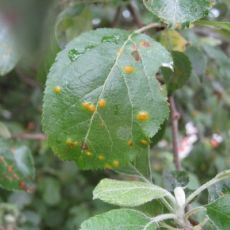 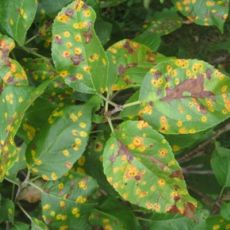 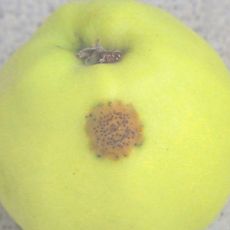 ‹ Powdery Mildew up Sooty Blotch and Flyspeck ›
Back to top