Fire blight symptoms can show on blossoms, fruit, leaves, shoots, branches and limbs, and rootstocks, and generally are readily recognized.

Blossoms are often the first tissue to show fire blight symptoms. Infected flowers first have a water-soaked appearance that quickly turns black or brown. Bacteria may spread quickly, first wilting the entire blossom cluster which then turns brown or black, then spreading to adjacent leaves and shoots. Temperature drives symptom development. The warmer the temperature, the sooner symptoms appear and the faster infections spread. After wilting, the tissue may show a sticky white to yellowish ooze produced by the bacteria.

One or more weeks after petal fall, shoot blight can develop. This wilting and browning or blackening of young, vegetative shoots is a classic fire blight symptom, with the young shoot tips bending over into a hook, like the curved end of a cane. Again, if the weather is warm and humid, bacterial ooze droplets may form at the base of the shoot. Shoot blight can expand into older wood, causing dark, sunken cankers. Once in the main trunk of smaller young trees, the whole tree may rapidly wilt, turning brown or black, as if scorched.

Fire blight cankers are a site where E. amylovora overwinter. As weather warms in the spring, the margins around cankers become less defined as bacteria move into surrounding tissue. Nearby shoots can be infected, producing a symptom called canker blight, where shoots have a characteristic yellow-orange color in the wilting tips in the early weeks after petal fall.

E. amylovora infects many plants in addition to apples and pears, including hawthorn, quince, mountain ash and cotoneaster. All of these plants may be a source of inoculum. The bacteria overwinter in bark and wood at the edges of cankers formed in previous growing seasons. With warm weather, around 65 F, the bacteria multiply and come to the canker surface as sticky ooze droplets. From there, they can be carried to other plants by wind-driven rain or insects.

Insects play a critical role in flower infection, when apples are most likely to become infected with fire blight. Insects deposit bacteria on stigmas in flowers, where they can multiply but typically do not cause infection unless washed to the nectary openings at the base of the flower by rain or heavy dew. Blossoms wilt and die within one to two weeks of infection, producing bacterial ooze that can infect new shoots. Insects and rain move bacteria to shoots, and they infect through microscopic wounds caused by  wind-whipping or possibly insect feeding, or large wounds caused by hail. More bacterial ooze on these shoots, inoculum that can cause new infections as long as shoots keep growing.

E. amylovora can move systemically in plants, without producing symptoms. The bacteria are also present on non-symptomatic plant surfaces. Their growth on and in plants is driven primarily by temperature. Below 60 F there is little bacterial growth, and low populations of bacteria don't present a fire blight risk. However, at warmer temperatures in the range of 70 to 80 F, especially with high humidity, bacterial populations explode, and soon reach levels that can cause blight. When trees are in bloom, the combination of a high population of bacteria and rain or heavy dew generally lead to infection.

While fire blight is a sporadic disease, when it does show up it can be devastating. Fire blight management involves several tactics at different times in the year, and should be done on an annual basis. Here is a list of tactics to use through the year.

Growers should use a dormant, or better, a silver tip/bud swell copper spray every year. Basically, copper is toxic to bacteria on the plant surface, and copper residue will reduce the population of E. amylovora in an orchard. Copper residue is largely depleted after two to three weeks, depending on rain, so does not protect flowers. There are many copper formulations. Apply a minimum of 2 lb. of metallic copper per acre.If in doubt about how much metallic copper a product contains, use the high label rate recommended at silver to green tip. Copper may be used with oil (1 qt./100 gal.), which can act as a spreader/sticker for the copper. Because copper sprays are meant to suppress the population of E. amylovora in an entire orchard, spray the whole orchard, not just the most susceptible cultivars or places where fire blight has occurred in the past.

The overwhelming majority of fire blight epidemics start at bloom, and shock waves from these primary infections will reverberate in an orchard through the summer and beyond, so it is essential that blossom blight be stopped. To do this, use a fire blight forecasting model.  There are two basic models, MaryBlyt and CougarBlight, which may be accessed and used independently, but which have also been incorporated into decision support systems linked to weather data on the web. Growers will need either an electronic weather station or a subscription to virtual weather to use these systems, but it makes monitoring much easier. Contact NEWA or Ag-Radar for details.

Spray Antibiotics at Bloom is Needed

If the fire blight forecasting system says that fire blight risk is high, then an antibiotic spray should be applied in bloom. 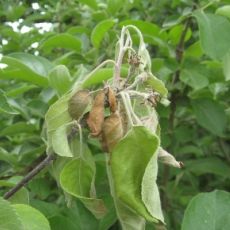 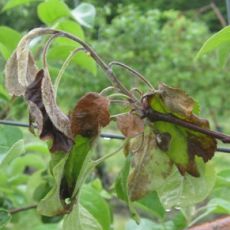 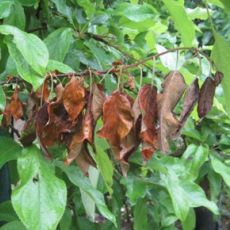 ‹ Apple scab infection periods up Powdery Mildew ›
Back to top