Sooty blotch appears as dark, irregularly shaped areas, like charcoal smudges on fruit. Flyspeck develops distinct black, pinhead-sized spots, generally clustered in groups of 10 to 50. These signs are fungal growth on the surface of apples, not technically symptoms. They often appear together on fruit, but one or the other may occur alone. Details concerning the signs, such as speck size or blotch margins may vary significantly, as many different fungi can cause SBFS. Other than causing cosmetic damage, and rarely some dehydration to fruit in storage, SBFS is not technically a disease, as it does no real harm to apples. However, significant blemishing causes fruit to be downgraded.

The different life cycles for the many fungi that may contribute to the SBFS disease complex are not well understood. Different species of fungi predominate in different apple production regions, but all have life cycles that are similar enough that symptom development can be reasonably well predicted and a single management approach used. Infection by SBFS fungi occurs soon after fruit set, though symptoms may take several weeks to show, depending on weather. Disease development is dependent on high levels of humidity in the tree canopy. Extended wet weather or periods of high humidity enable SBFS fungi to colonize apples and grow, but they grow slowly if at all during dry periods. New infections can occur throughout the summer to harvest. The fungi may remain invisible for several weeks, first appearing in late summer or early fall. Some SBFS fungi apparently have secondary spore production and infection cycles related to rain and high humidity, with higher rates of disease occurring in years with heavy or frequent rain. These fungi appear to overwinter on plants adjacent to apple orchards.

Fungicides applied approximately every two to three weeks, starting with second cover, will generally control SBFS. Accumulated leaf wetness hours from fruit set (170 to 220 h) can be used to more accurately time the first SBFS fungicide application. After that, timing should be based on the amount of rain and the time from the previous fungicide application. The most effective fungicides against SBFS include the strobilurins, Flint, Sovran, Pristine, and thiophanate-methyl, Topsin, T-Methyl. Captan is not as effective, but provides good control, and is a useful multi-site fungicide to mix with the more effective single-site materials for resistance management. Inspire Super and other pre-mixes that contain a QoI (Luna Sensation, Merivon) also provide good control.

Fungicides should be re-applied when they are depleted, either by rain or breakdown over time. Use the following depletion rules, applying whichever comes first.

Alternative Chemicals. Sulfur, liquid lime sulfur and phosphorous acid compounds (for example Prophyte, Phostrol) also suppress SBFS, though less is known about their depletion rates. With liquid lime sulfur there is risk of russeting on fruit and foliar stress.

Anything that slows drying in apple tree canopies encourages SBFS development. So larger trees that are poorly pruned develop more disease. Similarly, trees in areas where air circulation is poor develop more disease. The source of many of the SBFS fungi is wild plant hosts in woods or hedgerows adjacent to orchards. Cutting back these border plants, particularly well-known hosts such as wild blackberries, reduces disease pressure. Keep grass in the orchard mowed to reduce humidity in tree canopies.

Apple cultivars vary in the amount of SBFS at harvest, but this is primarily related to harvest date rather than resistance pathogen colonization. Later harvested cultivars have the highest SBFS incidence. Lower SBFS incidence on the earlier maturing cultivars apparently results from disease avoidance, as these apples are exposed to fewer hours of wetting and high relative humidity, environmental factors favorable for growth of SBFS fungi. 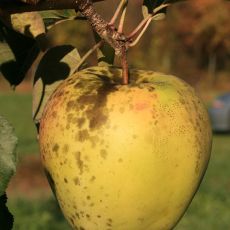 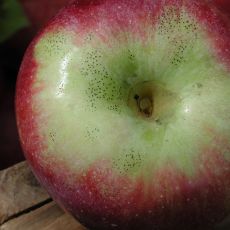 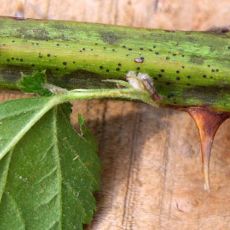