The white rot fungus, Botryosphaeria dothidea, often referred to as “Bot rot” or Botryosphaeria rot, can be a distinct canker on twigs, limbs, and trunks. The fungus produces two types of fruit rot, but leaf infections do not occur. Drought stress and winter injury have been associated with an increase in infection and canker expansion. This is a relatively weak fungal pathogen and is only problematic when a tree is stressed, such as due to drought, winter injury, insect damage, or fire blight.

New infections on twigs and limbs start to become evident by early summer, appearing as small circular spots or blisters. As the lesions expand, the area becomes slightly depressed.

Cankers stop enlarging in late fall and can be indistinguishable from black rot canker, making isolation of the pathogen necessary for correct identification of the causal organism. By spring small, black pycnidia (the spore-containing structures of the fungus), appear on the smooth surface of new cankers. On older cankers, these may be present throughout the year. Cankers exhibit a scaly, papery outer bark that is often orange and that can easily be peeled off of the tree. Tissues beneath the canker surfaces are watery or slimy and brown. Most cankers are not deep, extending at most to the wood.

Fruit rot infection results in two types of symptoms, depending on the developmental stage of the fruit. One type originates from external infections and the other appears to start internally. External rot is first visible as small, slightly sunken, brown spots that may be surrounded by a red halo. As the decayed area expands, the core becomes rotten and eventually the entire fruit. Red-skinned apple varieties may bleach during the decay process and become a light brown. Because of this characteristic, the disease may be referred to as "white rot."

The first signs of black rot are small, purple spots appearing on the upper surfaces of leaves and enlarging into circles 1∕8 to ¼ inch in diameter. Leaf margins remain purple, while the centers turn brown, tan, or yellowish brown, giving the lesions a "frogeye" appearance. Small, black pycnidia (pimplelike fruiting bodies of the fungus) may appear in lesion centers.

Infected areas of branches and limbs are reddish brown and are sunken slightly below the level of surrounding healthy bark. These cankers may expand each year, a few eventually reaching several feet in length. The margins of older cankers are slightly raised and lobed, and the bark within their centers usually turns light-colored, loosens, and scales off raggedly. This characteristic is not confined to black rot cankers, so it is not a good diagnostic symptom. Pycnidia form on dead wood of the cankered areas.

Fruit rot usually appears at the calyx end of the fruit. It can originate at any wound that penetrates the epidermis, including insect injuries. There is usually one spot per fruit, a characteristic that distinguishes black rot from bitter rot. Initially, the infected area becomes brown and may not change in color as it increases in size, or it may turn black. As the rotted area increases, often a series of concentric bands form, darker bands of mahogany brown to black alternating with brown bands. The flesh of the decayed area remains firm and leathery. Eventually, the apple completely decays, dries, and shrivels into a mummy. Pycnidia containing spores of the black rot fungus appear on the surface of rotted tissue.

White rot overwinters in fruiting bodies on dead, woody tissue. During spring and summer rains, spores ooze from these structures and are splashed to other parts of the tree. Dead wood and fire-blighted twigs and branches are especially susceptible to invasion, but living twigs, branches, and trunks may also be attacked. Fruit infections can occur at any time from the bloom period to harvest. Infections in young apples usually are not evident until the apples are nearly mature. External rot lesions are found most commonly on the sides of fruit exposed to high temperatures. Drought, heat stress, mechanical wounding, and winter injury favor disease development. The fungus grows best under warm conditions, with the optimum temperature for infection about 86°F.

Black rot can infect from petal fall through harvest. The fungus overwinters in fruiting bodies (pycnidia and perithecia) on dead bark, dead twigs, and mummified fruit. It can invade almost any dead, woody tissue and is frequently found in tissue killed by fire blight. Early leaf infections often are visible as a cone-shaped area on the tree, with a dead twig or mummified fruit at the apex.

In the spring, black pycnidia and perithecia release conidia and ascospores, respectively. Conidia may continue to be produced during wet periods throughout the summer and may remain viable for long periods. When wet, the pycnidium produces a gelatinous coil containing thousands of spores. Disseminated by splashing rains, wind, and insects these spores can infect leaves, the calyxes of blossoms, tiny fruit, and wounds in twigs and limbs. Leaf infection develops during petal fall, at which time conidia attach, germinate in a film of moisture within 5 to 6 hours, and penetrate through stomata or wounds. The optimum temperature for infection is about 68°F. Infections of fruit and wood may not become visible for several weeks.

Initial fruit infections occur during the bloom period but are not usually apparent until midsummer as the apple approaches maturity. Throughout the growing season, infections occur through wounds. Harvest injuries may become infected and the fruit may decay during or after storage, especially if the fruit was harvested during a wet period. Dead fruit spurs or twigs, particularly those killed by fire blight, pruning wounds, winter injuries, and sun scald, are commonly invaded by the black rot fungus.

Management for both diseases

Management programs based on sanitation to reduce inoculum levels in the orchard are the primary means of control. Prune out cankers, dead branches, twigs, etc. which serve as inoculum sources and dispose of dead wood. This should be an important component of both current-season and long-range management. Prune and remove cankers at least 15 inches below the basal end; properly dispose of prunings by burial or burning. 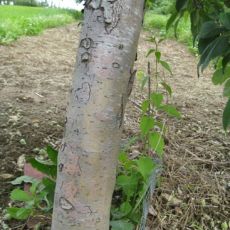 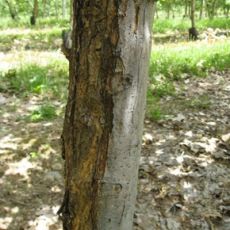 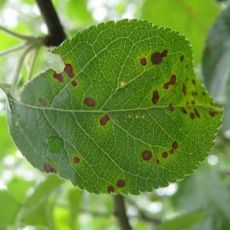 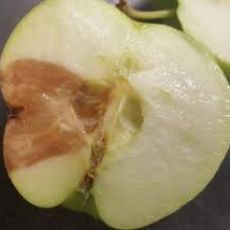 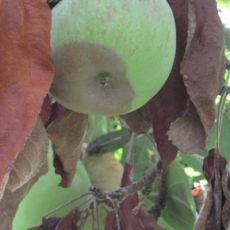 ‹ Sooty Blotch and Flyspeck up Bitter Rot ›
Back to top