Native to China, OFM is now found throughout much of the world. The adult OFM is approximately 1/4 inch (6.5mm) long and has a faint gray-brown salt-and-pepper pattern on its wings. Pupae are reddish-brown. Fully developed larvae are about 1/2 inch (12.5mm) long, pink to white in color. Eggs are about 1/32 inch (0.7mm) in diameter, yellow-white, and laid singly on leaves or twigs.

OFM overwinters as a fully-grown larva (caterpillar), on limbs or trunk. First-generation moths appear in May, and females lay their eggs on upper leaf surfaces, frequently on the terminal leaf of a young shoot. When the caterpillar hatches, it bores into the shoot primarily of stone fruits, causing the terminal to wilt or “flag”. Later generations attack the fruit of both stone fruit and apples. In the northeastern United States, the OFM usually has 3 generations (flights) per year, depending on weather conditions. As fruit develop the larvae will often enter near or through the stem end of stone fruit or calyx end of apple and bore directly into the interior of the fruit. OFM larvae do not feed on the seed; in contrast, codling moth larvae do feed on apple seeds.

Pheromone traps are available to monitor OFM activity and effectively time sprays. Traps are placed in the inside of the tree at eye level or higher. Follow manufacturers’ guidelines for proper trap and lure maintenance and replacement. One trap per ten acres is recommended for commercial orchards, with a minimum of two traps.

Place sex pheromone traps in early April and check at least three times a week until biofix (i.e., first sustained capture of two or more moths per trap) is established. Then, calculate and record degree days to determine the percent egg hatch for each generation and timing of insecticide sprays (see ‘management’ below). Continue to monitor traps weekly throughout the season. Pheromone-baited OFM traps will also catch lesser apple worm, so it will be important to know how to distinguish between the two.

The apple lesserworm is native to eastern North America. Adults are gray-brown moths quite similar to OFM but smaller (about 1/3 inch long with 7/16 inch wingspans) and with more brown-orange patches on the wings. When the moth is at rest, a gold band becomes evident across its back

Several management options are available for OMF including insecticide sprays and mating disruption. Regardless of the type of OFM management method chosen, careful monitoring is critical to the success of IPM tools.

Chemical control of the OFM can be improved by using a degree-day model to establish optimum timing of insecticide sprays targeting newly hatched larvae since most insecticides are not effective at controlling adults. The most important spray against OFM on peaches is for the first generation. Keep in mind that there is a lag period for egg hatch after the moths fly. The first insecticide spray for OFM often coincides with petal fall, so sprays targeting plum curculio should also control the 1st generation of OFM.

Control measures for the second-generation egg hatch ought to occur at around 1,100 growing degree-days (base 45°F) after biofix.

If codling moth is also a problem in the same block, select a mating disruption material that releases pheromones of both species. 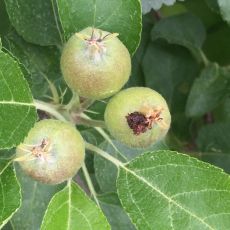 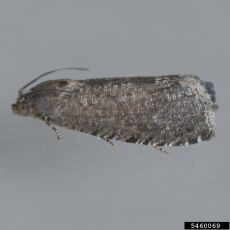 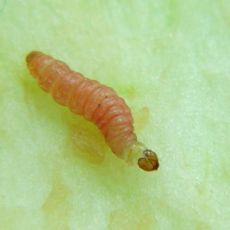 ‹ Obliquebanded leafroller (OBLR) up Plum curculio (PC) ›
Back to top