Blossoms: Infected blossom clusters will undergo petal fall normally, but subsequently wilt after 1-2 weeks depending on the temperature. Young infected pedicel may develop an orange cast depending on the cultivar. The young fruitlets will eventually become blackened and necrotic as the infection progresses. Infected blossoms will remain attached and are difficult to remove. In high humidity conditions, bacterial ooze will be produced on the surface of wilted tissues. Similarly, as the infection spreads to shoots, they will wilt and turn black with bacterial migration. The mid vein of leaves on infected shoots may also become blacked and necrotic, and areas of brown to black necrosis may appear across the surface of leaves.  As trees progress into winter blackened cankers may on infected shoots and infected sections of the leader. Depending on when they develop, cankers may or may not lead to a perennial source of overwintering inoculum for later years. If fruit are produced on blighted shoots, these will become arrested in maturation, become black to brown and ooze with bacteria in high humidity conditions.

E. amylovora overwinters in cankers which can be large on the trunk and main leaders, or smaller on infected shoots or limbs. As the weather warms in the spring, cankers ooze and bacteria can be dispersed to blossoms during rains and by pollinator insects at bloom. Later in the season, storms, deer feeding, and hail can cause trauma infections from bacteria remaining in the orchard. Root sucker management by mowing or physical removal can lead to additional root infections on susceptible rootstocks.

Agricultural antibiotics are most effective means of controlling blossom blight.  Of the antibiotics, streptomycin and kasugamycin are the most effective, but only streptomycin has local systemicity.  Regardless, oxytetracycline, streptomycin, or kasugamycin should be applied prior to infection events as suggested by disease forecasting tools. Alternatively, applying low rates of copper at weekly intervals is also practiced to protect growing shoots from secondary shoot blight infections.

Antibiotic Resistance in the Eastern U.S.

Streptomycin resistance is fairly prevalence in E. amylovora populations in the Western and Midwestern U.S.. Streptomycin resistant was E. amylovora is commonly found in Michigan and was detected in several orchards in western NY. Interestingly, resistant strains in NY have either become quiescent or were subsequently eradicated as they are now difficult to find in NY orchards. Overall, Resistance to antibiotics in the Eastern US is fairly rare and has not been reported for oxytetracycline and kasugamycin at the time of this article.

There are a variety of biopesticides and systemic acquired resistance inducers, which can be effective in low-pressure situations with calendar based application schedules. Many of these are acceptable for organic agriculture, but may require considerable numbers of application to be effective.

Sanitation is accomplished by removing blighted shoots and whole trees. For best effect, prune blight shoots into last year’s growth or 12” inches below the last visible sign of necrosis. If infection reaches the leader/trunk in small (<2-3” diam.) trees, remove the entire tree. When removing fire blight, take care to choose the coolest and driest days possible.

No pear varieties are truly resistant to fire blight, however, some are better than others. European pears that show some degree of resistance include: Harrow Crisp, Harrow Gold, Harrow Delight, Harrow Sweet, Harvest Queen, Kieffer, Magness, Maxine, Moonglow, Old Home, Orient, Seckel, Starking Delicious, and Warren. Among Asian pears showing some degree of resistance are: Chojuro, Kikusui, Kosui ,Seuri, Shinko ,Shinsui, Singo, Tsu Li, and Ya Li. The ‘Harrow’ series of pears out of Ontario, CANADA are quite resistant to fire blight. 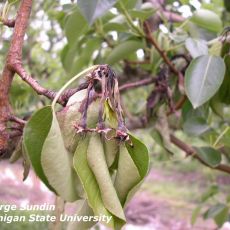 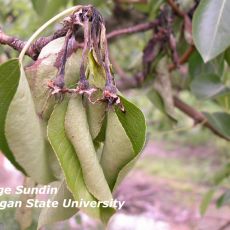 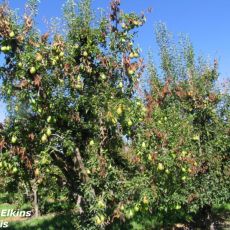 ‹ Fabraea Leaf Spot up Pear Scab ›
Back to top